In a couple days, tomorrow, saturday I will be driving to Utah for my art show.
Every one is invited to attend. The show is at Coal Umbrella. My good friend Greg Caldwell will also have pottery for sale in the back room of Coal Umbrella.

I am thinking of having Butternut Squash soup because I love it and soup is a good Autumn food. There will also be tea and hot chocolate. Maybe some some sweets, I am not sure. Does anyone have any food suggestions? Or want to help me make the soup? Or help me make some other food?

This will be my first solo show and I am very excited for it. I have put a lot of work into it. There will be many paintings, ceramic tiles, dioramas, and wooden cut outs. I have been working on a coffee table book that I had hoped to have for sale at the show, but I don't think it will be ready in time. Everything will be for sale, fairly cheap.

Here is a flier I made for the show. I photographed it with the Macbook photobooth, which reverses things, so make sure to look at it in a mirror: 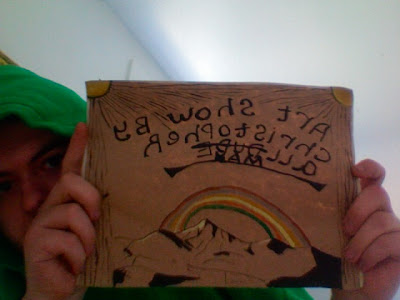 Here are some examples of some things that will be for sale: 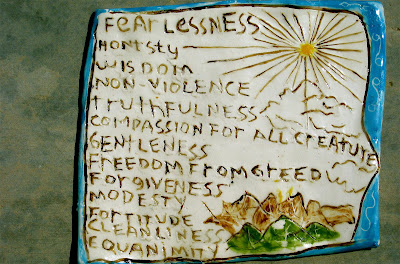 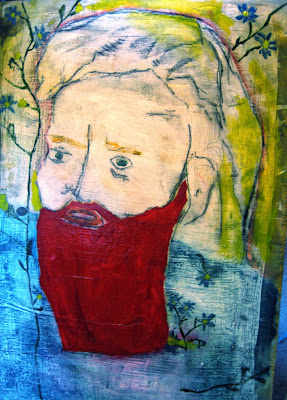 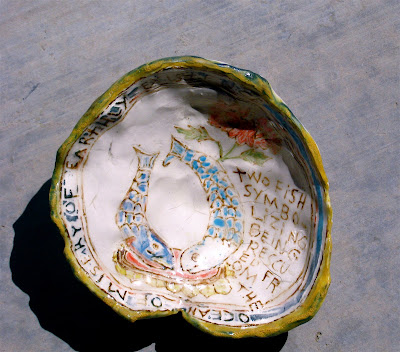 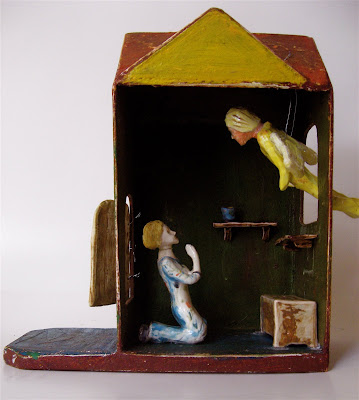 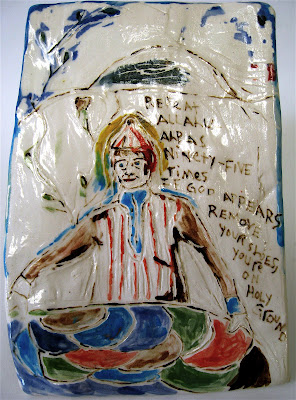 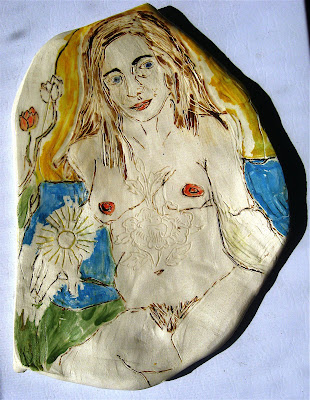 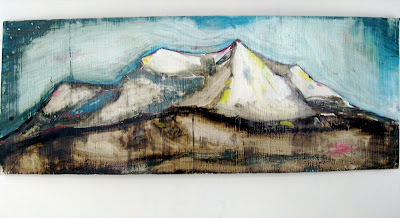 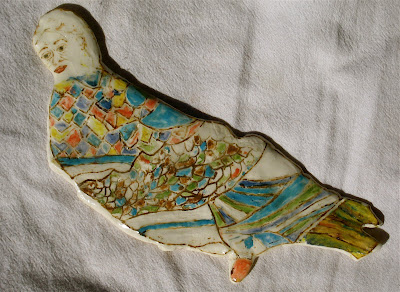 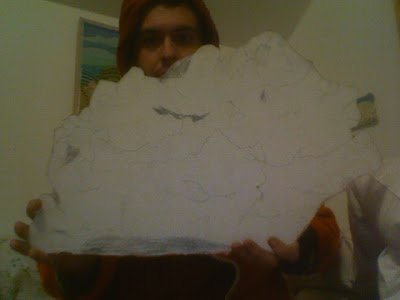 And I got a new sweater: 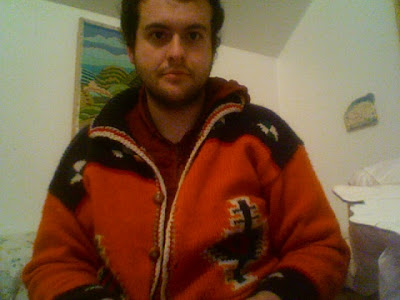 I bought it from a South American man who sets up at my school as it approaches Christmas time selling hand made goods from his home country I can't remember which one. I was looking at, and admiring this sweater, and mentioned how much I want it, but won't be able to buy it for a while. The man was kind enough to let me take it now and pay him later. I wanted to give him something for collateral, but all I could find was an ID from a check cashing place, I wouldn't care even a little if I never got back, but I left it with him anyway.

Totally unrelated. It seems parents frequently don't realize how thoroughly counter productive their efforts to mold their children in their ideal image are. I can understand a mother's concern for her daughters well being, but behaving in certain ways seems only to reinforce the undesirability of particular ideologies.

One important exception to this rule is my brother's desire to turn his son Elliot into a steam boat captain.

Situations like these remind me of one of Bahu'u'llah's most well liked quotes: 'If religion is a source of disunity, it is better to have no religion at all.'

It also reminds me of in unhealthy romantic relationships, where one partner likes the other one more than the other, or one wants to break up with the other, so the one with the lower hand does all they can to try and compel the other into liking them, becoming emotionally draining, having the opposite of the intended effect. I think almost everyone has within us a resistance to feeling forced, especially emotionally forced. This creates very frustrating situations for the one doing the forcing. Damned if you do, damned if you don't type feelings. They may realize that if they try and force someone to like them, it pushes that away, but if they do nothing, they fear their love may slip away (though in reality, the other will often feel attracted to that sense of emotional independence)

While not exactly the same sort of situation as with a parent and child, they are similar in that damned if you do, damned if you don't type feeling I imagine a parent must feel. So I can sympathize with the frustration likely felt when a parent sees their child developing beliefs they see as incorrect. They want to do something, yet by doing something it seems to have the opposite effect. And by doing nothing they fear the child will slip into oblivion.

I see that as something unfortunate and dangerous about religion. Otherwise moral people can be seen as bad, because they do not share certain beliefs. Belief is not, and should not be a choice, and so has no moral value, yet religion often confuses this. Creating disharmony when there needn't be any.

Situations like these are also good reminders to me for when I am a parent. I would like to think it is not in my personality to try and compel another person to fit a certain mold, but often we don't realize certain aspects of ourselves until faced with certain situations. When I have little Mashas and Boris' of my own, I hope I can use recent events to remind me of the sort of parent I want to be.

(I was deliberately sort of vague about some things. I guess I don't feel it is my place to be more specific. I will just say that I am not speaking of my own parents. Though I once had conflict with them over similar issues, it has long since been resolved and we are closer than ever.)

Also, one last thing (phew)
Since it is halloween I am wearing a costume today. I already have been downtown ad it appears to be a hit.
Even though I have worn the same costume for the past 8 years, I guess I forgot to bring it with me when I moved. Which is SUCH a bummer. (in reality, I had no emotional response when i realized i had forgotten it. I a m a r o b o t).

Here is my costume for today. I guess it is obvious from the photo, but in case not, I am dressed as god. i wish i could come to your show, the work looks really great! i hope you take lots of pictures of the opening.

on an unrelated note, does that mean i should stop forcing eliot into being a steam boat operator?

No, i think forcing elliot to be a steam boat operator is an excellent idea. I even edited my post to reflect this.

oh, and thanks for saying my work looks great. i will take tons of photo(graphs)

hey chris, does that mean you tried the butternut squash soup recipe I gave out over my blog? I like your costume and your art.
Along with the whole steamboat captain thing, Ricky is also forcing Isobel to be a democrat. He even gave her a temporary Obama tattoo.

i tried your soup carie and it was dee-lish;
chris, your art is good. been wanting to get to a show down at coal umbrella for a long time. maybe this will be that time.

what time? mabie ill stop by for the squash soup and caldwells famous catch phrases.

carie, thanks for liking my art and costume. I actually haven't tried your recipe yet, i just love butternut squash soup in general. but mayhaps i will use your recipe for my show? if i do i will pretend i invented the recipe, because that is how i roll.

liz,
thanks for liking my art. it would be cool if you came to my show. i would be like 'hey liz' i think we became facebook friends after i sent out the invites, i will send you a facebok invite now.

Jake,
The show probably starts around 6 or sevenish? i dunno. it is a part of the downtown gallery stroll, so whenever that goes on. and, greg has catch phrases? like what?

Catch Phrases like this: I said, hey Im jake whats your name and he said - and he replied "my name is Greg" -

WOW, can you think of any better than that?

i like your art
im sending boris/masha to replace me, though it may not be the same, i am sure they will sit on the couch with you and draw dinosaurs on your thobe.