I have been perusing different pro prop 8 blogs and websites to get a gist of what sort of arguments are being used. I have only noticed three distinct arguments. Tradition. God's will. Allowing homosexuals to get married 'threatens' heterosexual argument.

The tradition argument is easy to deal with. Open a history book!! There have been numerous cultures throughout history that were okay with homosexual marriages and relationships. Probably the best treatment of this subject is 'The Way we Never Were' by Stephanie Coontz, who, incidentally, teaches at my school, though I have never met her, and wasn't aware of this while reading her book.
But if it was accurate history was always on the side of forbidden homosexual's to marry, so what? We also have a tradition of racism and slavery.

I think people can forgiven for misunderstanding history because we often have a generational amnesia that views the ideals of past generations having extended back forever. But the stupidest of the arguments is that allowing gay people to marry will threaten the institution of marriage. What does this even mean? Are people so insecure in their marriages that if people who they disagree with also call their unions marriage they feel threatened? Do they think that allowing gay people to marry will somehow cause heterosexuals to enter into homosexual relationships in the way religions now attempt to force homosexuals into heterosexual relationships?

The third argument, it beings God's will is, I believe the real reason people take a stand against gay marriage(other than simple bigotry and homophobia), and everything else they come up with is an ad-hoc grasping at straws attempt to justify why their conception of God would ask for such a thing.
Of course it is hard to argue with what people believe God's will to be. When a person bases their belief systems on something not rational, rational argument can't touch it.
But for Christians, I don't think their justification for claiming to know that God is opposed to homosexuality is as strong as they may think. There is no record of Jesus ever having said a word on the subject. The apostles mentioned it, but these were men who all throughout gospels are misunderstanding Jesus. Where their are references that are made in the Bible, homosexuality is sometimes referred to as an abomination. Punishable by stoning. Sounds pretty straightforward, but just a few lines a way it says the same thing about eating shellfish. (Leviticus 11) If we aren't going to believe one, we then have to justify why will we will continue believing in the other. What is the justification? Tradition and threat to heterosexual marriage. 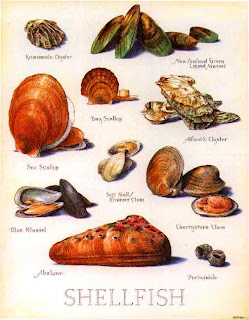 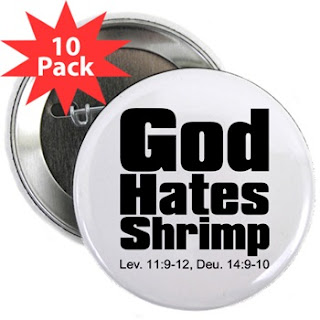 Email ThisBlogThis!Share to TwitterShare to FacebookShare to Pinterest
Labels: gay marriage, homosexuality and shellfish, proposition 8, proposition 8 is so stupid

I have a fourth argument against gay marriage. When my grandson was 5 he mused on whether he would marry a man or a woman when he grows up.

To their credit, his parents did not know where he had got this idea from.

Still, it worried me momentarily.

I suppose my momentary worry doesn't constitute a valid argument.

One reason Christians don't take that whole shellfish thing seriously is that the issue of what you eat as a Christian has been taken care of in the Paulian letters. He points out that Christ has fulfilled the law (all the old testament stuff) but not did away with it. he specifically talks about what food is allowed. HOWEVER Paul continues to note that men shouldn't sleep with men. I think this rehashing in the new testament of the abomination of homosexuality is one reason Christians today stick with it and not the shellfish thing