My niece Isobel finally got the doll I made for her.

A while ago Isobel, who is....four? Got an email address and began sending me emails. In thinking of what to respond to her I got the idea to tell her I would mail her a present. I didn't know what I would mail her, but then the idea occurred to me I could make her a doll with a ceramic head of herself.

While I am very pleased with the results, the face did not turn out quite like I had hoped. The face doesn't look too much like Isobel. This was the first time I had ever sculpted a face. I thought whatever ability I had in drawing a face would translate into sculpting ability, but it did not at all. It was like learning how to draw a face for the first time all over again. Plus, I only had one photo to work with. It would have been much easier if I had photos of her face from multiple angles, which I ended up asking for, but by then it was too late to make any significant changes.

Also, the glaze turned out different than I had hoped. I put a thin layer of skin color over the entire face, allowing it to pool in some places to cause interesting changes in color, but the pigment entirely burnt out in the areas where it was not pooled.

also, I had to break the back of the head with a hammer cause it did not maintain its original shape and caused the face to constantly be facing upwards. I realized it was risky taking a hammer to the doll, and was happy I only broke the area I intended. To cover up the broken area I glued doll hair onto the missing area.

also, after my brother saw a picture of the doll, I learned I had spelled her name wrong. There is no 'E' at the end. Fortunately the letters were just ironed on patches and the 'E' was easily peeled off. Photos: 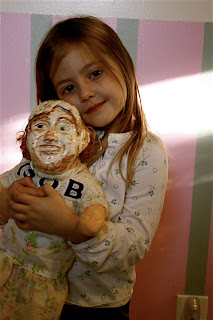 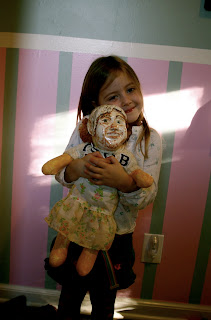 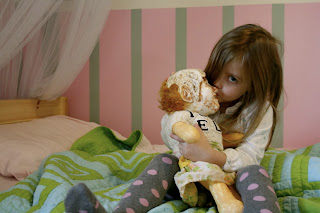 When my other niece, Chloe,6, saw the doll she said 'cool, I don't think Isobel is going to like it.' I asked her why not and she said 'cause the face looks like your face'

When my nephew, Mitchel, also 6, saw the doll he said it looked like the face was covered in blood.

This is the email Ricky, her father, sent me, my mom and sister:
The moment you have all been waiting for has arrived. Isobel's reaction to her doll. I still haven't seen it, I'm excited to go home and talk to her about it, this is what carie said:

isobel just got her doll from Chris. She was pretty excited about it having her name on it but once I took the bubble wrap off the head she kind of stayed quiet for a minute. She said she is scared by it but that she likes it. She also said, "It's face is funny. it's glass, can you put it up now?" meaning she wants it on a shelf to be displayed. She really liked the couch and bed furniture that he also sent. She keeps saying you will be so surprised when you get home and see it.

Then he sent this in reply to my reply to his email:

i think isobel likes her doll more than the email may have let on, she thinks it's very special. i think it will be one of those keepsake things that she probably won't play with really but will always want to have and will grow more attached to it the older she gets. or more scared of until she is so terrified of it she smashes it against the wall to end her nightmares. -totally yankin yer chain dude!!!!!
Posted by Chris Almond at 08:13

this doll is the scariest doll I have ever seen.

hi whitney. thank you for your comment. j/k, it sucked. is it really that scary? what about this doll? http://www.scaryforkids.com/pics/antique-doll.jpg

you should have made her face a marshmellow

the doll does look a lot like isobel. in the photos i can't even tell them apart!!