One thing I miss about being religious is the sense I could have existed under different conditions than I actually do. For example, had it been 'my time' I could have been born in the middle ages, or in China, or as the world's youngest Taco Bell manager, managing a Taco Bell from the day I was born, and that even though I would have had different genes and parents somehow I would have still been 'me'. Despite the different physical circumstances, because my soul or essence would be within that body, it could still be considered 'me'.

As I believe now, the only conditions under which I could exist, are those within which I do. Meaning, had that particular sperm of my father's which happened to connect with my mother's egg at that particular moment not happened, then I would not exist. To say that I could have been born 500 years ago becomes a meaningless concept. Without something like a soul, in what sense could that individual born at that time be me? Even if through amazing chance he were exactly like me in every way except being a china man from way back, it would not mean anything to say that individual was 'me', anymore than saying any other individual was me.(because we are all made of the universe)

For me to have been born at some other time, my parents would have also had to have lived at that time. and their parents would have had to have lived just before them, and theirs before them and back and back to the beginning of life. Every direct ancestor conceiving their offspring at the moment they did. Had any of that, at any point happened any differently than it did, I would not be be.

I suppose it is a funny thing to miss, this feeling that I could have existed under different circumstances. It isn't that I miss not feeling as if my identity were arbitrary, because even when I was deeply religious I felt an individuals identity was arbitrary even if your particular station during this life were not (your soul happened to have certain characteristic because it happened to be created that way or by chance, or it had always existed and was always that way. Arbitrary).

One reason I think I miss it, is that I often like imagining what I would be like if I had been born in Rome during it's peak, or ancient Japan, or ancient Africa, or a variety of other things, and believing that such a thing is not even theoretically possible(aside from time travel), makes it a little less fun to imagine.

Which isn't to say I entirely do not believe in a soul or an after life. I like the idea of it. Often I pretend to myself I do believe these things because it is comforting and familiar. I frequently pray and feel it benefits me even though I don't really believe it is something more than a psychological phenomenon. There are even rare moments when I genuinely do believe, but mostly, despite how much I may want to, I do not. There are other things I miss. Some things I do not. Maybe I will make a list.
Posted by Chris Almond at 19:28 4 comments:

Email ThisBlogThis!Share to TwitterShare to FacebookShare to Pinterest
Labels: afterlife, identity, me, soul

Lately I have been living my dream of living the house husband lifestyle. Marissa's schedule is much more full than mine, so I have taken upon myself the responsibility of cleaning and cooking. I really enjoy this. Having lived on my own for many years this is nothing new, but now getting to do it for another person as well is very enjoyable.
This isn't too suggest that Marissa does not also help with household things, but she works in a funny restaurant where she is on her feet most of the day, while I do things draw pictures of birds. This allows me the time and energy to take care of the house. I have always liked the idea of being a house husband, but wasn't sure if I would actually enjoy it. Turns out I do.
Posted by Chris Almond at 10:28 3 comments:

I normally take classes where we discuss abstract concepts, but recently I have been taking classes where we learn technical skills such as how to use a letterpress or mix ceramic glazes (I am now in a ceramic sculpture class and we have been learning how to mix glazes).
Being in classes like these where a lot of task doing goes on leads to a lot of people making little mistakes here and there. Being in an environment like this has reminded me how much people love telling others what to do. Very often, as soon as someone is noticed doing something differently than it was demonstrated to us by the teacher another person will immediately point it out. While I'm sure this is sometimes done out of genuine concern for the other person, wanting to help them get their work done as efficiently as possible, much more often it seems to be done as a way for the corrector to seem knowledgeable.
Ever since I wrote about the role serotonin plays in terms of our perceived status among those around us, I've been thinking about it often. It seems to help explain so much of human life. When people tell others they are doing something the wrong way, it then raises their perceived status relative to that person, which then raises their serotonin levels. Considering this it is no wonder that whenever my teacher spells something wrong on the board the students jump to correct him even though we all know what the word is he is trying to write and it doesn't matter if the e is supposed to be an I based on an entirely arbitrary rule. When they correct the teacher's spelling, their perceived status relative to him goes up, raising serotonin levels.
However, like so much of life, these attempts at raising their status often have the reverse effect and make the person seem unpleasant and insecure.
Posted by Chris Almond at 08:54 2 comments:

I have been experimenting with using Google News as a way to check the news, which has led me to reading news sites that I had otherwise only vaguely heard of, such as the New York Daily News.
I don't know a lot about this paper. It all seemed to be gossipy and boring, but I was amazed to see that their number 3 most read news item was:

This is news? That people find interesting?!?!?! 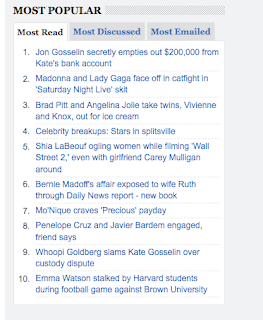 Posted by Chris Almond at 06:34 No comments:

Yesterday, as I was driving back from Trader Joe's with a bag full of foods much fancier than I normally eat, such as Champagne, Creme Brule and pasta that is kept in the refridgerator rather than the shelf, all this because it was the one year anniversary of Marissa and I becoming 'official' in our coupledom, I began thinking back to what I had written about the economy. I had written about how having a less than ideal economy may actually be beneficial for individuals. While thinking about it yesterday, I felt some misgivings, realizing I had probably been mistaken. Then this morning I come across this from Proceedings of the National Academy of Sciences
(not that I read Proceedings of the National Academy of Sciences, but I read Discover, which includes highlights from various journals):

Researchers found that when the economy takes a turn for the worse, public health actually improves. Mortality rates fell during the Great Depression, the study found, possibly because people couldn’t afford to smoke and drink as much, and because the unemployed have more time to sleep and less chance of dying in industrial or traffic accidents.

While this isn't exactly the same as what I had written about, it was similar and reversed my previous misgivings and gave me new misgivings about yesterdays misgivings.
Posted by Chris Almond at 11:32 No comments: