My class only meets together two times a week. Monday and Tuesday mornings. The rest of the week is open studio time. Later I will write more about my class and how much I love both the class and teacher.

This entry is specifically about the early meeting time of those two days we do meet.

Because we meet so early Monday and Tuesday, on these days I need to wake up around 7:30 A.m. if I want to be in my seat on time. Sometimes in the morning the marsh land I live in is foggy. I think it is beautiful when this happens. These photos were taken from inside my bedroom. 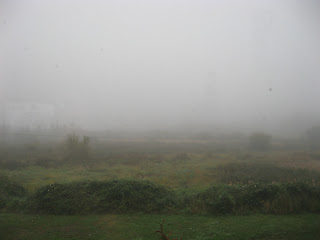 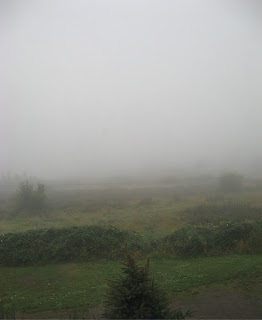 Having to wake up that early the first two days of the week shifts my normal sleep cycle a few hours early than normal for every other day of the week. I am happy about this.

During the summer I generally woke up around 9 or 10 a.m. each day. I would have preferred to have woken up earlier, but having nothing external motivating me to wake up early and condition my body to the habit, my desire to experience mornings was overshadowed by my desire to avoid the pain that is waking up earlier than one is used to.

I want to explain how special the morning is to me. I think I will just repeat a passage by Thoreau that does well in capturing my feelings(I still laugh when I think about L. Tom Perry, my agnostic friend Tom Perry's grandpa, giving a General Conference talk based on Thoreau's Walden. And I can't believe he used that as a basis in blaming the financial crisis on individual excess of the average citizen rather than unethical banking/lending and lack of regulation) The quote (from chapter 2 of Walden):

The morning, which is the most memorable season of the day, is the awakening hour. Then there is least somnolence in us; and for an hour, at least, some part of us awakes which slumbers all the rest of the day and night. Little is to be expected of that day, if it can be called a day, to which we are not awakened by our Genius, but by the mechanical nudgings of some servitor, are not awakened by our own newly acquired force and aspirations from within, accompanied by the undulations of celestial music, instead of factory bells, and a fragrance filling the air--to a higher life than we fell asleep from; and thus the darkness bear its fruit, and prove itself to be good, no less than the light. That man who does not believe that each day contains an earlier, more sacred, and auroral hour than he has yet profaned, has despaired of life, and is pursuing a descending and darkening way. After a partial cessation of his sensuous life, the soul of man, or its organs rather, are reinvigorated each day, and his Genius tries again what noble life it can make. All memorable events, I should say, transpire in morning time and in a morning atmosphere. The Vedas say, "All intelligences awake with the morning." Poetry and art, and the fairest and most memorable of the actions of men, date from such an hour.-----We must learn to reawaken and keep ourselves awake, not by mechanical aids, but by an infinite expectation of the dawn, which does not forsake us in our soundest sleep.'

Like most Thoreau, the quote is good and inspiring, but also reflects Thoreau's unpleasant side of arrogance and his sense of superiority to others. 'the man who does not believe that each day...... has despaired of life...is pursuing a darkening way' Come one h.d. take a chill pill.

In the mornings, when it is not raining, I like to walk around our property, picking and eating wild blackberries. I sit on the back porch and pet Mr. Mouser, the stray cat we feed that has finally over come his fear of me and even sits in my lap, though still freaks out if I try and pick him up. 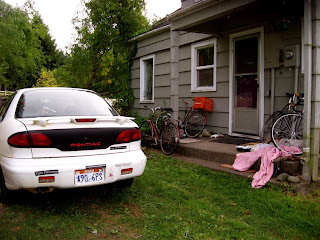 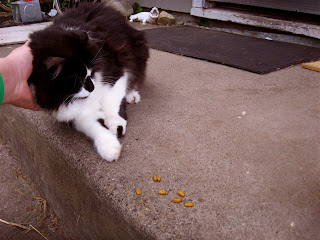 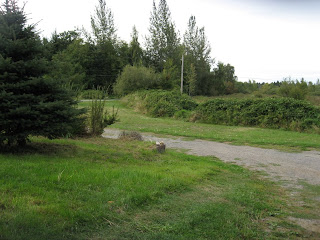 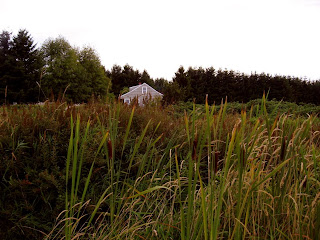 This is me drinking from my favorite cup(when Greg, Laura Barlow and I went to Portland a few years ago, Greg bought it at a wonderful Pottery Studio, knowing how much I admired the cup he later, generously gave it to me.)(This picture was taken last year, when I lived alone in a cabin in the woods on the shore of the Puget Sound, but it is the cup I generally use each morning for tea or coffee): 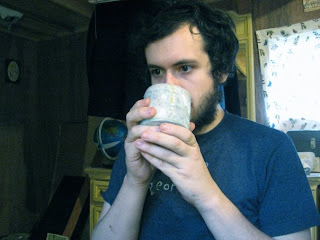 I drink coffee and read on the couch. This particular couch. 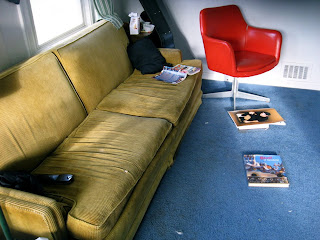 In recent mornings I have been reading the Koran, comparing the two different translations I have. I have recently acquired an excellent translation of the Bible, which has in several ways altered my perspective on Jesus teachings(more on this later.)

I like to read inspiring writings during morning hours. Books such as the Koran or Bible(which I did not used to find inspiring at all, but I do this Oxford translated Bible). Other mornings I read Baha'i or Buddhist writings. Sometimes the Bhagavad-gita. I have an excellent book titled 'Jesus and Buddha: The Parallel Sayings', which is a collection of their overlapping teachings and actions (which is the great majority of them. Jesus: not unique or original. But still good and valuable.), This book I always find insightful.

I find reading something inspirational or uplifting things each morning helps set a tone of calm peace for my day. Something I wrote about in more depth here.

Some mornings I may meditate(my favorite type of meditation so far is Mindfulness) or Falun Gong(Which is the same thing as Falun Dafa. I do not understand entirely the double name. I strongly recommend mindfulness and Falun Gong to all people, be ye black or white. J/k, only white people.). Although I am generally more inclined towards those activities in the late afternoon or evenings when the opportunity to slow down and be calm has greater impact, rather than the morning when I am already in a calm and slow state of mind.

I live in a wonderful place to be able exploit the resource that is called morning. This comfortable house, on this beautiful property, with warm, intelligent and funny roommates, two cats, an apple tree, a greenhouse, blackberry bushes, fresh coffee each morning made by my roommate. 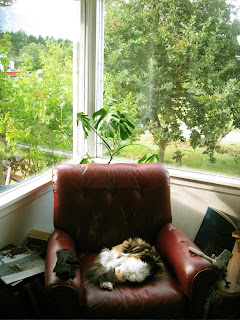 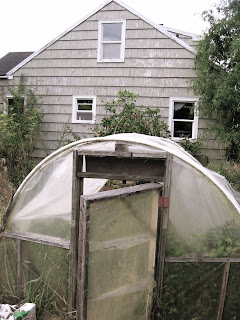 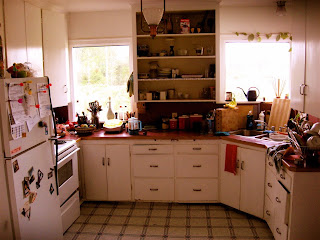 Each morning I wake up happy and excited to be living in Olympia, to be attending the school that is my number one choice, in a class that is as good as I could hope for, to know and be connected with a wise, funny and peaceful girl named Marissa. I miss Marissa, (hi Marissa) because she is on the other side of the world for two more months, but we are able to talk free, online, via Skype, for as long as we want, which can frequently be longer than 8 hours at a time. Before I don't know if I had ever had longer than a 3 hour telephone conversation with anyone, now longer conversations are a regular part of my life. There are moments, often as I lay in bed waiting to be overcome by sleep, where I miss her so much it is difficult, but aside from the missing, every day is exciting to wake up to. 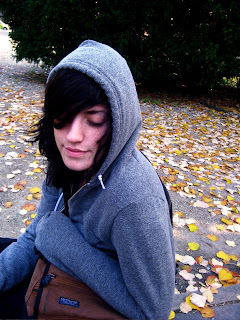 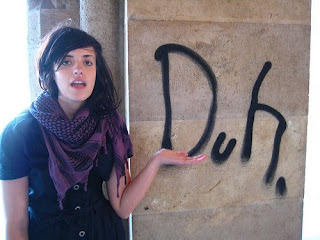 This morning I noticed a new spider web had been made the night before on our back porch. I found it pretty and hope the spider who made it is able to thrive and not have his or her web destroyed. 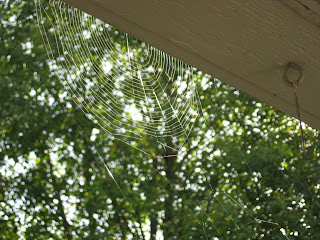 I also like doing the dishes in the mornings. I enjoy washing dishes by hand more than using a dishwashing machine. I enjoy the slow, meditative process. I also like being able to do a small gesture that I know adds something nice to the lives of my roommates.

This is the table where I am sitting and writing: 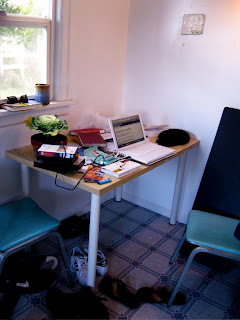 This is a close up on the tile you see on the wall in the photo above. I made it this summer. The text is adapted form a list of virtues in the Bhagavad Gita 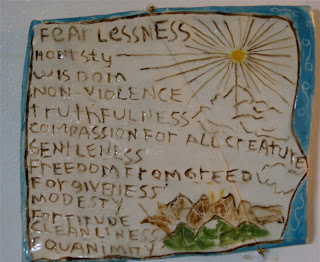 Here is a picture of me, wearing what I have been wearing for the past several days, my thobe, with a flannel on top, which is pretty much like I am wearing a skirt. But the thobe is amazingly warm. Keeps me warm in this chilly pacific northwest fall weather. It makes me a heart thobe. that is Marissa's joke. Marissa loves word play jokes. 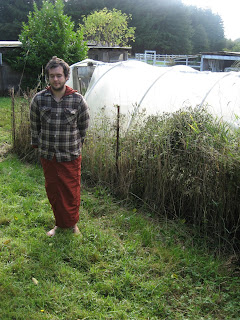 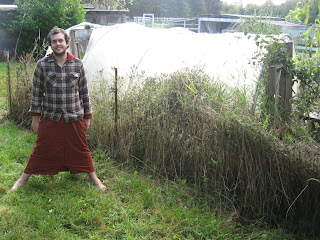 you gave marissa credit for her joke, but no credit did my soul get.

of course i remember you! i've been subtly blogstalking you since i moved here. "i wonder if i'll run into chris allman somewhere..."

A fine post, sir, both words and pictures. Your antipathy to being conscious at dawn is a common flaw of youth. You will grow to savour the early morning one day, I hope.