I saw a few minutes of a documentary the other day. I can't remember what it was or even the circumstances of me seeing it. It seemed like it was about the human body. The part I saw was talking about hunger. It showed that when a person goes a certain amount of time without eating, a certain chemical gets released throughout the body which increases alertness and focus.

The thinking is that if a body has gone without food, it is because they are in a situation where food is scarce. Increasing one's alertness and focus would help the hunt for food be more successful.

My immediate thought was about fasting. Many religions and cultures fast. I really enjoy fasting. I find I feel good after a time without food. A sense of clarity and focus. I hear people say that fasting without prayer is just going hungry, but I have noticed no difference in the efficacy of fasting with or without prayer. And now, with this new knowledge, it makes sense why fasting is something so common. Of course a variety of people's throughout time had experienced hunger, and noticed that when they did they seemed to experience some sort of an increase in mental clarity, and so the positive effects of hunger, like so much that is mysterious, took on a religious and spiritual aspect.

A few years ago, on 'This American Life' I heard an interesting story about a guy fasting for...maybe 20 days? He reached a state of euphoria that sounds very intriguing to me, and so i gave it a try. I did my research, and got some electrolyte supplements to take each day to maintain my health. I made it about five or six days before I went crazy. I was already experiencing some mania and this fast pushed it over the edge.

This was around the time I met Heather Lea Hawkins, and had quasi moved into her house, since her roommates, for some reason never used the house.( My moving in with heather was just as friends. We were never romantically involved).

She was aware of my fasting, and helped me get the supplements I needed. I quickly began to feel an increased clarity of mind, and she said I had become very insightful.

One day she came home to see this note(I was happy to see a few months ago she had posted this photo on my myspace profile): 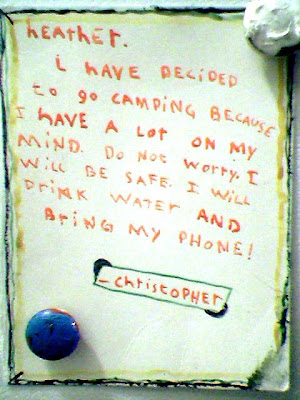 Next thing she knew I was in the hospital. It is a very long story. But it involves me being in the mountains, totally dehydrated and starving, disoriented and weak. Eventually calling 911, search and rescue finding me, helping me down the mountain. Riding in an ambulance while receiving an IV to a hospital in a small Utah city I am not even sure which one, where everyone was incredibly nice and I kept asking for meal after meal. Then another ambulance ride to another hospital where I stay for 5 days. I could and have been ever since it happened been writing a book about the entire experience. What just now wrote isn't even the tip of an iceberg. More like a pebble on top of the iceberg, in terms of all that went on and led up to it.

There isn't much of a connection to that fasting story, to the fasting info above it, aside from it being about fasting. Well, I guess in considering that new info, it makes sense that if one is already having some mania, that the body being flooded with a chemical which increases alertness would take take the mania to another level.

I have since learned that fasting is a fairly common undertaking for a person while manic. That is one trouble with mania is it leads to behaviors that would, just on their own, create manic like effects.Such as not sleeping and not eating. If one doesn't eat or sleep, even if otherwise mentally sound, they can develop delusional thinking, so if you are already in an altered state of mind, and then you stop eating and are not able sleep, your thinking becomes incredibly weird. When I look back on that time I am able to see how a variety of circumstances came together just right to make me wacky. In writing that last sentence it would have been so easy to use the term 'perfect storm'. So easy. I had to struggle for a minute how to write it without saying 'perfect storm'. Three cheers for me not using that term. It is one of my least favorite terms and it has really gained a lot of momentum lately.
Posted by Chris Almond at 12:21

your blog is such a joy to me. i read it after work everynight while i drink tea. wierd. maybe. but, i figure if any one could appreciate that it would be you.

p.s. i'm coming sometime within the next 6 mo. keep you posted.

yeah, sometimes not eating is rad.

Perfect storm : "The phrase was awarded the top prize by Lake Superior State University in their 2007 list of words that deserve to be banned for overuse".

I don't think I have ever heard this phrase till now, and had to look up its meaning.

I'm so glad you resisted the urge to use it.

I'm also glad that your post which started out in praise of fasting (which I never do, though my alertness and focus if anything needs a bit of damping down, it's so acute) ended up as being a dire warning against the practice.