As I have gotten caught up in the strong emotions surrounding the presidential election, I have found myself feeling somewhat disturbed by the intensity of my negative emotions toward the right-wing. I have been feeling things like 'only a retard or an ass-hole could possibly be a Republican'.

That is what comes from the emotional part of my body. But the rational part of me recognizes it is not true. I know there are kind-hearted and intelligent people who desire many of the same things for our country as I, but disagree on how those things can be achieved. And even those who aren't intelligent and kind-hearted, or desire things for our country I believe to be bad, my feeling negative towards them doesn't help them or I.

(The debate I had with Jon Wells, the kid I knew in high school, as well as those on the pro-prop 8 Facebook group has, perhaps, given me an unfairly negative sense of the character and reasoning people use to support their right-wing tendencies. As well as watching clips online of people like Bill O'Reilly. My body is generalizing from these few individuals to an entire group of people.)


I think we are all familiar with being able to recognize something with the parts of our mind associated with reason, yet not be able feel it with our emotional mind, even if we want to.

I don't like the feeling so poorly of a group of people or towards particular individuals, especially when I know my feelings are a distorted stereo-type. When our emotions become high, particularly in negative, angry ways, it clouds our judgment, making it difficult to recognize when we are wrong. It creates within us a sense of superiority, indignation and barriers between ourselves and others. These are all things I want to avoid. And of course it is difficult to feel peaceful and calm while feeling negative about others.

One thing I have been trying is to imagine positive emotions, energy, love, and compassion towards those who may evoke feelings of frustration within me, such as a certain mom(not mine) who is constantly putting me down. I have found this to be very effective. I imagine this positive energy flowing from me to them, until I then genuinely feel positively and compassionately towards that person. The feelings then remains with me throughout the day, or if I feel the negative feelings returning, it only takes a little effort and time using visualization to bring the positive feelings back. I have found this not only works for other people, but things as well. If there is something annoying me while meditating, such as an itch on my body, or construction banging outside, I imagine feeling positively towards that disturbance, until I then develop genuine positive feelings.

Today it occurred to me I could try this technique towards the entire right wing and hopefully overcome the negativity I want to free myself from. (well, what my imagination has created for me as the stereotype of the right wing.) I tried it and found it worked well. It is a little more difficult to try and imagine a group of people, most of whom I don't even know, but it proved effective. I now feel much more compassion towards these people. I still struggle understanding how people can believe certain things, and be so inconsistent in their thinking, and I still very much disagree with them but overall, I have found myself being able to empathy and compassion towards this imaginary group of people, and the people who aren't imaginary like Jon Wells and Bill O'Reilly. I am happy about this. I feel a greater peace and calmness returning to me that had lessened over the past little while.

The first polls are just now closing. Fingers crossed. Crossing myself like a Catholic. Nailing myself to a cross.

Here are a couple photos I took in my yard in Olympia. The first few are of the chicken coop in my back yard that I am returning into a Tea Room. The first photos were taken when I very first opened it up, and discovered vines, a tree, rotted wood and old chicken coop things. Then after I cleared some vines away and removed the coop things. Then a photo of it partway through the renovation. It is a lot further along now, but I don't have a more recent photo. The work has been going slow, because when I am not at school I am usually working on my show, doing homework, or talking to Marissa(hi Marissa♥). After the tea room photos are photos taken in my yard on a foggy morning. Almost every morning is foggy because we live in a marsh. 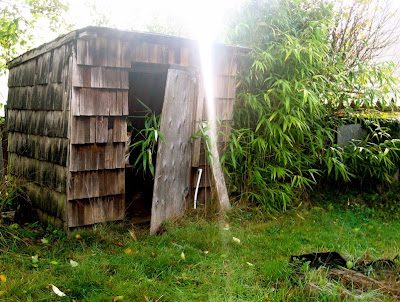 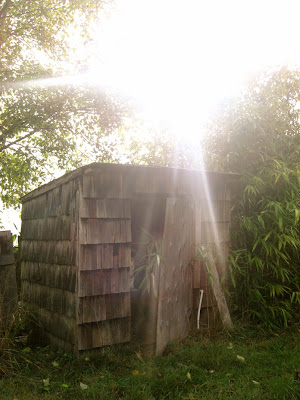 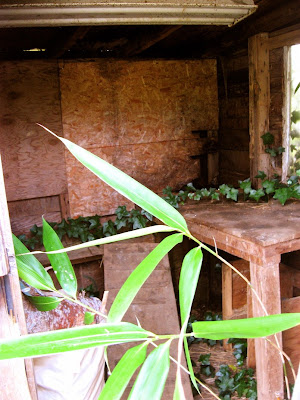 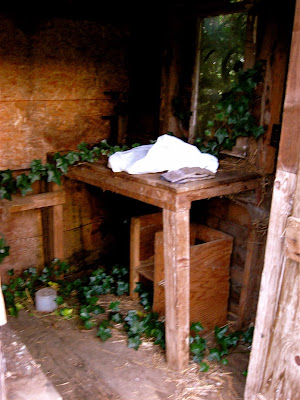 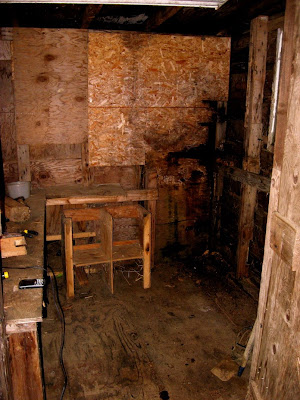 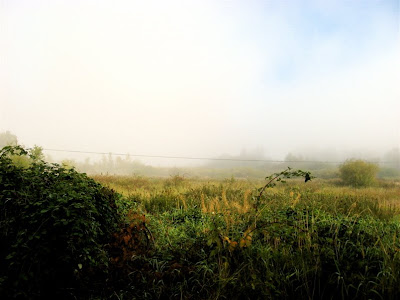 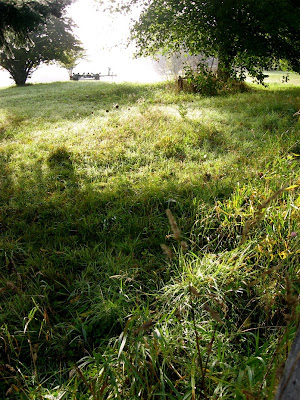 -I think I need to try more meditation.
-I hope to see continued updates on your tea room.
-I will be your best man for sure. Thank you for the honor. (that will be the first line of my toast)
I don't think we ever had any other classes together but who knows.

I think being married is great and hope things work out for you and your special girl named Marissa. I of course don't know her but assume she is a very neat person. oh I served in Eugene Oregon. a place that I love and would love to live there again someday.

I looked up Mikey Engberg on myspace and found him. unfortunately, he hasnt updated his profile in like...2 years. but it was funny...I clicked on his name and started reading his about me before i looked at a photo closely. All i had to do was read through all of the grammatical mistakes and spelling errors to know it was him. Pretty entertaining. And I way different than I ever expected.

The best part, is his headline name is "Panty pleaser teaser." So Mikey.

you told ME i could be the best man. wa wa.

I'm so pleased at the level of consciousness where you can not only recognise that failure of compassion but also know what to do about it and furthermore get success from that and to cap it all, share it so eloquently and inspiringly.

As to the elegant tea-room, beautiful idea and a triumph of faith and determination over rotting timbers!

As to all this best man talk, it seems I am the last to know of your plans but congratulations anyhow. I think you and Marissa are both beings of impeccable taste.

...for people who like claiming nature for walking around in their jammies there whole life lol

@anonymous.
I read your comment 4 times and am still confused on what it means.