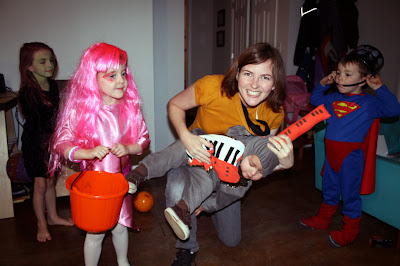 I think this picture is SO funny.
The person inside of the keytar she is holding, is her son, and future steam boat captain Eliot. To the left is her daughter Isobel, dressed as Jem. Both costumes were made by Carie.

When I look at the pictures of Elliot's costume, I can't help but think of The Evergreen State College mascot, the geoduck: 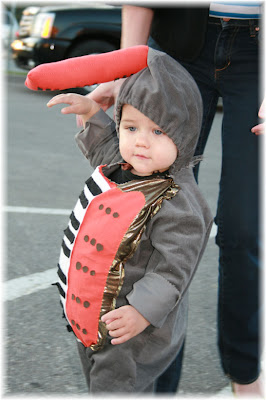 I didn't end up doing anything for Halloween. I didn't really feel like drinking and partying, which was all that I was aware of in terms of options. I was in the mood to watch to tell scary stories while drinking hot chocolate around a fire, while passing out candy to trick or treaters, or perhaps have a fire with scary stories in the woods.

Since I wasn't able to fulfill that wish, I listened to Npr in my bedroom while making an ink drawing of a deer. Then at midnight left with Kahea for Utah, where I am now, and will remain until Saturday.

When we got into the state, we stopped by Isaac's in Salt Lake, and ended up staying the night because we were pretty sleepy. When I stay the night at Isaac's, I frequently share a bed with him, since his bed is pretty large and has memory foam which is so comfortable. Apparently, last night Isaac had a hard time falling asleep because I kept scatting in my sleep. All night I was singing stuff like 'doo bee bee doo dapaodou-pido'. At one point I woke myself up with my singing, I heard myself singing 'Yaba daba doooooo'. I asked if I had just sung Yaba daba doo, or if I had dreamt it, he confirmed it was real. He said it was pretty annoying and made it difficult to sleep, which is understandable, and I imagine I would have felt the same, but getting to hear about it, and not experience it was very funny. Unfortunately, I can't remember what I was dreaming about that included me scatting.
Posted by Chris Almond at 23:25

Geoducks are cute, just like eliot. Your story about scatting cracked me up.

Seriously what could you HAVE POSSIBLY been dreaming about that would make you scat?!!! I can't imagine a dream that would include scatting, and why on the night you sleep over?? I'M SO ANGRY!! but seriously fun times watching Ben Stein talk about how Darwinism is a slippery slope to eugenics and the holocaust.