I have come across three interesting animals recently.

Remember that entry I posted about the real life furby?
That one is from the sea. But there is another real life furby, that was thought to be extinct, and was just re-discovered(oh funny! i did an image search for 'real life furby' trying to find this picture and the ninth picture was ofme! No joke! It is the picture I have of myself on my blog, I assume because of my real life furby entry.: 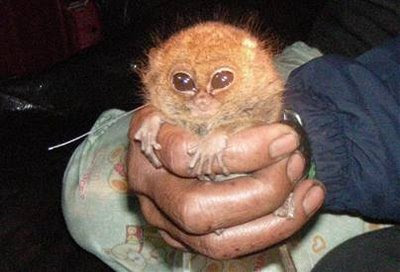 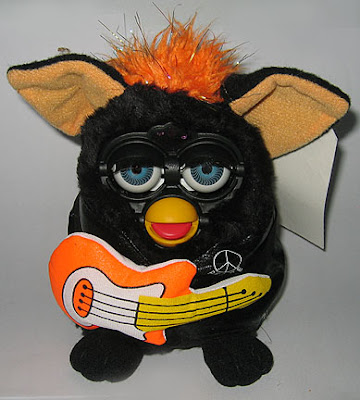 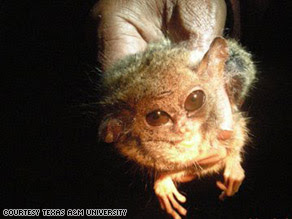 This next animal is extinct. It is called a Chalicotherium. It is an early mammal, and a proto-primate. I think it is so cool. It is easy to see how it is related to things like horses and giraffes, but is an evolutionary step towards being a full primate like a gorilla. It almost looks like it could be some alien intelligent species. 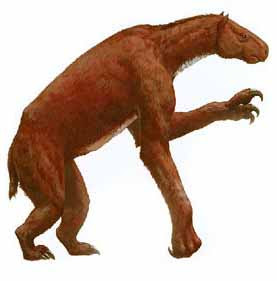 I just looked it up, to make sure I had the name right, and came across a different artist rendition. Since this animal extinct, obviously there are some uncertainties about its appearance. I think seeing a variety of artist interpretations can help one have a more full understanding of the species. Like reading a variety of translations of a particular text. Since none will be exact, reading several, is like drawing a hole around the thing you want to describe, but cannot name. 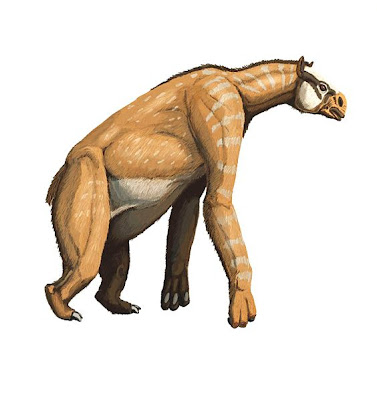 And here is my artist rendering: 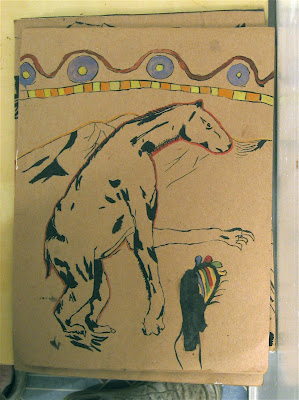 The final animal is not extinct. But looks like it should be. And if I have my way it soon will be. 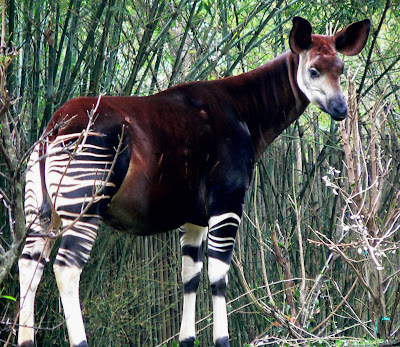 Someone needs to show this to Kirk Cameron, who beleives that because there are not animals transitional looking animals like the 'crocoduck' evolution cannot be true. Although he concedes there is one animal, the duckbilled platypus, fitting his criteria, he then says it is that way because it is just how God created it. Which is pretty unfair of him. He sets up a criteria for proving evolution true, then acknowledges that criteria has been met, but still doesn't allow it to be evidence for evolution.

Here is a video of Kirk doing this:

Perhaps someone need show him the Okapi, because it fits his criteria of a'transitional' animal, that is supposedly what we would see if evolution were true. Even though of course, it won't persuade him. (even if there were not animals like the duck billed platypus or the Okapi, I think evidence for evolution solid for very different reasons. The criteria he sets up of what the world would look like if evolution were true, comes from a misunderstanding of evolution. I don't think any scientists who understands evolution expects to find a 'crocoduck'. Even though the world does actually, on rare occasion, look the way he thinks evolution requires, it is because of a fluke, and not because of a requirement of evolution)


Here is another view of the Okapi I just found, which surprised me, because I had been under the impression that the Okapi was about the size of pony. 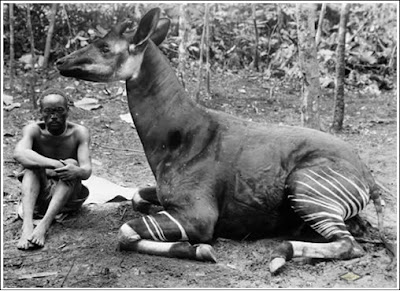 Re the Kirk Cameron evolution interview, and all the debates going on in America about gay marriage, abortion & so on, which for some unaccountable reason become aligned with political parties:

It all seems so bizarre and I don't want to sound patronizing but it's as though most Americans are stuck at a stage in adolescence where it is such fun to debate through the night, and take contrarian views.

This is not in any way to belittle adolescence or interesting animals. thanks for those.

re vincent
I think i get what you are saying, and in was agree. I didn't post those animals for the purpose of debating kirk cameron. Just as i was posting that animal, i remembered kirk cameron making that statement. And I didn't take your comment as belittling. I enjoyed it and found it interesting.
But to the issue in general, i do, in part, agree, but i also feel that in america at this time, it is not just an abstract debate and discussion. These are issues which have direct effect on people's lives. Groups are actively fighting to have intelligent design taught in schools, have homosexuality discriminate against etc. These are real issues that effect the way people live their lives, and so are hotly debated, not just for the sake of debate or being contrary, but because it affects the way our country is run.
but it is interesting that you note this is something that seems unique in ways to America. So these sort of culture wars do not rage in England? Is your sentiment reflective of a general attitude in England about America?

No, these culture wars do not rage in Britain at all. The British way is to grumble and get on with it. Of course there are issues, and the newspapers try to whip readers into righteous indignation, and comedians make fun of the various attitudes. But there isn't the sense that "others are robbing me of my rights, so I must erase their point of view from the cultural map".

This British attitude isn't genetic, but purely cultural. Quite recent immigrants soon get into the spirit of its politeness and tolerance.

But I cannot be the representative of a general attitude in England about America.

What I do notice here is a sentiment that even if you are certain someone is a terrorist, you can't drop a bomb on them. You have to conduct a trial under the criminal law. And you would have to go through a legal extradition process, not "extraordinary rendition". I'm referring to the missile strike in Pakistan which may have killed Rashid Rauf, a British citizen.

But even here, there is much less expression of outrage than I would expect: just a kind of shrug "Oh, these naughty Americans. They are our allies, unfortunately, so what can we do?"