Recently, for the first time in my life, I have taken a great interest in history(other than religious history)

I have found it fascinating because it seems to serve as enormous, large scale, psychological experiments. By studying a variety of cultures and their histories, we see the walls within human beings operate. We see, how under certain conditions, an entire civilization might find something we see as prima facie wrong, such as pedophilia, something good, at times even admired, such as with the Romans and Greeks.

For almost no other reason do I find history interesting. And it is still odd to me the way people get obsessed with one particular war. Or one battle within a particular war etc.

I have also enjoyed learning biographical information of the men and women who have shaped history.

A few interesting this about Hitler:

'After the early 1930s, Hitler generally followed a vegetarian diet, although he ate meat on occasion. There are reports of him disgusting his guests by giving them graphic accounts of the slaughter of animals in an effort to make them shun meat.'

'Hitler idolized Wagner as a young adult, saying: "I don't touch meat largely because of what Wagner says on the subject.'

A quote from Hitler:
'But there's one thing I can predict to eaters of meat: the world of the future will be vegetarian." On January 12, 1942, he said, "The only thing of which I shall be incapable is to share the sheiks' mutton with them. I'm a vegetarian, and they must spare me from their meat.'

A quote about Hitler in reference to his vegetarianism:

'[he] is a vegetarian, and that he does not eat meat because of his general attitude toward life and his love for the world of animals? [Hitler] is an exemplary friend of animals, and even as a chancellor, he is not separated from the animals he has kept for years?...[He]is an ardent opponent of any torture of animals, in particular vivisection, and has declared to terminate those conditions...thus fulfilling his role as the savior of animals, from continuous and nameless torments and pain.'

Hitler did not smoke or drink:

'Hitler was a non-smoker and promoted aggressive anti-smoking campaigns throughout Germany. He reportedly promised a gold watch to any of his close associates who quit (and gave a few away). Several witness accounts relate that, immediately after his suicide was confirmed, many officers, aides, and secretaries in the Führerbunker lit cigarettes'

Some evidence suggests he used Methamphetamine (though the dangers of the drug were not known at the time, and was regularly given to soldiers to help fatigue and morale)

"Hitler often praised Christian heritage, German Christian culture, and professed a belief in Jesus Christ. In his speeches and publications Hitler even spoke of Christianity as a central motivation for his antisemitism, stating that "As a Christian I have no duty to allow myself to be cheated,(this is Chris: I would think the notion of 'turning the other cheek, says just the opposite) but I have the duty to be a fighter for truth and justice" (Chris again, his private writings show more ambivalence about his personal religious beliefs. Some writings suggest a strong belief, others suggest no belief)

Hitler attended school as a young boy with one of our most influential philosophers, Wittgenstein:

"I know Herr Hitler very well personally and am quite close to him. He has an unusually honorable character, full of profound kindness, is religious, a good Catholic"

"He has been described as a calm and charming person when he was in front of the men in his closest circle. His closest friend, Albert Speer, described Hitler as a very hot-tempered man with a lot of distance from reality. He also said that Hitler was kind as a person and a delightful man to spend time with."

He was described as being particular kind to children: 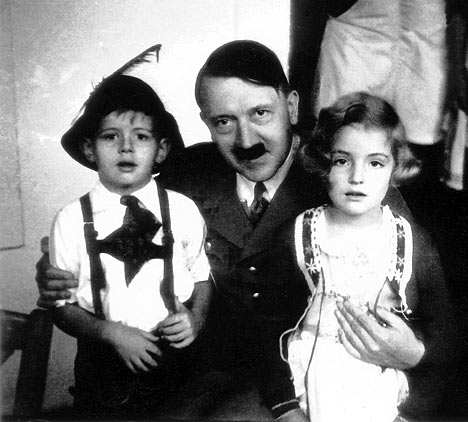 And it is fairly well known Hitler was an artist, having twice been rejected from the Academy of Fine Arts Vienna. Starting in 1905 he for several years lived a Bohemian lifestyle in Vienna. Good chance had you are I been in that time and place he could have been among our social circle.
A Painting by Hitler of Mother Mary and the Baby Jesus:

If this was all one knew about Hitler he might seem like a pretty good guy. Perhaps, were he in a different position during his life, he may have led what most would consider a good or ethical life. Perhaps a bit anti-Semitic, but that would only put him in the company of men such as Henry Ford, Ulysses S. Grant, and countless others throughout history, who had cultured towards anti-antisemitism in the same way we are cultured against it.

I find stuff like this fascinating. To realize that some of the worst atrocities on earth, can be carried out by who may otherwise be nice people. People who may have even thought they are doing good while doing harm.

I hadn't intended to go here, but it is also things like this that frustrate me about 'official biographies' about men like Joseph Smith or L. Ron Hubbard and others (though L. Ron's strikes me as more fabrication than distortion by omission). Nearly anyone can be made to sound pleasant or inspiring if only certain details are told. It is for this, I often feel frustrated when I hear high up LDS leaders speak of the importance of honesty. I believe the withholding of relevant information to be a form of deceit. A particularly devious form, because it can give the guise of honesty, even in the speakers mind, while creating a total distortion. Something even a devout Church member would acknowledge applies to the Church on an official level, particularly in terms Church History and Official Biographies..

An extremely interesting post Chris. I'm a fan of Ludwig Wittgenstein and aware that they were at the same school but thought they were in different years. You can really see the adult Adolf in the child! It takes more effort to see the adult Ludwig, but still it is possible. I have a biography of him which shows photos of the child.

Your post reminds me of reporters and investigators who look into the stories of violent criminals and come away shocked not to find monsters but very ordinary looking and sounding people. I remember hearing one use the phrase "the banality of evil..."

@
You were correct in believing the several years apart in school. I'm not sure what the circumstance of the photograph is and why they are both in it, though would be interested in learning. Also, thank you for the supportive comments. I have enjoyed reading your blog as well.