I have found there is a certain peace that seems to come along with being honest with myself.

A couple months ago in a class someone told a riddle and in trying to solve it I asked a question which I didn't really think about before it came out of my mouth and when it actually did come out of my mouth it turned out to be a very dumb question.

After I asked the dumb question the teacher made a joke about it and one of my nerdier classmates responded with an annoyed 'no! jeez!'. (it had been a 'yes or no' question)

After this moment I find myself stewing over it a little bit, coming up with a variety of reasons why the question may have seemed dumb but was actually very smart and that it was my classmates who were at fault for laughing at the question. I felt a feeling of frustration and resentment that seemed to linger for a while as I kept thinking about it, thinking of more elaborate explanations of why the seemingly unintelligent question was actually clever.

After a while I finally realized what I was doing and I acknowledged to myself that the question had in fact been stupid and I would have laughed as well if I heard it asked by someone else. The truth was, I had been embarrassed because I felt it made me look dumb, so in an attempt to defend a certain image of myself in my mind I was trying to think of explanations which allowed me to maintain that image. Once I acknowledged this to myself the frustration and resentment that I felt while trying to defend myself in my mind was released and became replaced by a sense of calm acceptance.

It was a simple realization, one I am sure many people have at various points in their lives. One I have probably had before and will probably have again.
But since that moment it has been something I have thought about often and in moments when I am feel frustration towards another person or thing, I try and think if my frustration is actually a defense, if it is me trying to rationalize something to myself in order to protect my ego or the image I have of myself. When I am able to recognize and acknowledge that I have been doing this, I have found that I will immediately feel sense of relief and release. That moment of recognizing and letting go of your defenses can be such a freeing experience.


I took a picture of myself while moving my eyes back and forth as fast as I could and this is the result. Doesn't it look creepy? 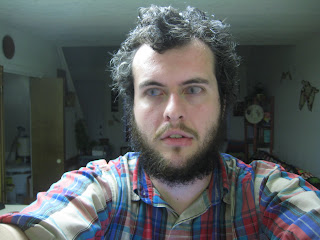 Email ThisBlogThis!Share to TwitterShare to FacebookShare to Pinterest
Labels: defenses, honesty to myself

once i wrote a poem entitled: honestly.

it was an honest poem.

yep, pretty creepy. (of course, i'm referring to the photo of your face.)