It is Christmas Eve. Oh, I guess now it is Christmas.
I like some of the stuff Jesus may have said, but I would not consider myself a Christian, but I still celebrate Christmas.
In some ways Christmas is just another day to me. I enjoy the holiday season. Things feel fun and exciting, but Christmas itself doesn't feel much different than other days around this time. It is kind of fun giving and receiving presents, but there are many things I enjoy much more. Any day that has a lot of expectations to be a particular way I think is unlikely to fulfill those expectations. I often have good experiences and memories created around the holiday time, but rarely are those moments actually on Christmas day. Christmas usually feels chaotic with lots of kids around being kind of selfish about their toys and kind of loud. It is fun, and I enjoy kids, but it isn't the highlight of the year. Often the good times are on Christmas Eve, playing games and watching movies with my family without the young kids being wacky. Tonight was good, I spent time at my sister Amy's house. We watched Hellboy 2 and Flight of the Concords, we also talked and made jokes and I ate an individually packaged pickle and saved the pickle juice in a cup and made my sister's couch smell like my arm pit, but Christmas time definitely isn't the same without my brother and his wife around.

Speaking of expectations. It is now a little more than 24 hours till I pick Marissa up from the airport. This is a highly anticipated moment, that I do not think will be an example of unmet expectations. Reuniting with a person is different than a holiday. Marissa described our reuniting as being the most highly anticipated moment of her life and I would say the same applies for myself.

I want to write an entry explaining why I feel so strongly about Marissa. I was thinking I might write that entry right now, but I want be able to fully articulate my thoughts and I am probably too sleepy right now to do it justice.
One thing I realized a little while ago, is that even if I were not in love with Marissa I would want to marry her. I don't think love should be the primary reason people should marry. Love is fickle and chemical, and won't, in and of itself hold a relationship together because it is not substantial. People did not marry for love until somewhat recently. Probably the early 1700's ish. When people did start marrying for love, it was controversial and looked down upon. People wrote passionately against love induced marriage. They felt that if people began to marry for love, then what would there be to hold the couple together when their love waned, as it almost always would(typically the infatuation stage only lasts about 1-3 years, but recently, some very interesting research showed that showed in a small minority of couples it never seems to wane), at some point in time. It was thought that if marriage was done for love, then the divorce rate would increase, and those people were correct, the divorce rate went way up.(when women were allowed to divorce without husband's permission the suicide rate for women went down significantly) However, I also imagine that people were able to have much more fulfilling relationships.

Although I am deeply in love with Marissa, she is so much the type of person I would, with my rational thinking, like to spend my life with, that even if I were not in love with her, I would want create a family with her.

One benefit of having had several serious relationships and having been in love before, is being able to better recognize the need for attempting to view a person rationally when considering a romantic relationship. There have been girls I felt very strongly about, while being able to recognize traits in them I found undesirable. Because of the biological reaction I had to them, I was initially able to look beyond those unwelcome attributes. But as time passed, and the oxytocin left my blood stream, those same traits became great obstacles towards having a healthy and fulfilling relationship. The first few times this sort of thing happened, it was sad and confusing. It troubled me that I could have felt so strongly at one time, then later feel so different.

Of course I very much enjoy being with Marissa and see her as my best friend. She is a person I admire and connect with on all levels, she also has the relationship and human being skills I see as necessary to having a happy and fulfilling relationship, and without that, after time those other things would not be able to be realized and appreciated.

I remember one time a person signed an email to me 'your friend in a world of foes' (which is ironic, because she is one of the very few people in this world I would think of as a 'foe'). I think that very well describes what it feels like for me knowing Marissa. That she is my friend in a world of Foes. Not that I see the world as being made up of foes, but no one else feel so fully 'on my side'. With Marissa there is never any sense of competition or struggle in the slightest. Only kindness, giving, compassion and empathy. We have been dating for... I guess about 4 months now?, and while we do not agree on everything, there has never been even a moment that felt like tension, let alone a fight. All of the attributes I have tried hard to cultivate in myself in terms of interacting with others, I feel come natural to her. In Ukraine she was told by the Principal's wife that not only was she their best teacher, but the best teacher they had ever had. This doesn't surprise me, because she is so good at being emotionally giving and present.

I took this screen shot as we were video chatting recently. I was amazed at how clear the image is. She got a new Macbook, which I think has something to do with it. it almost looks like a photograph. 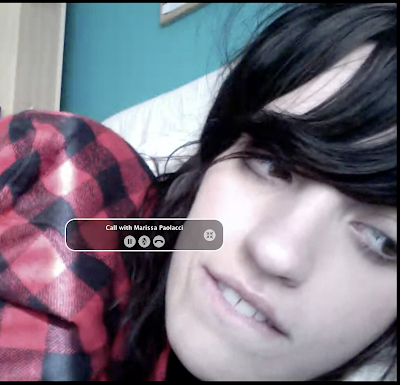