Last night, as Marissa and I were winding down for bed, Marissa went to the kitchen for a bed time snack. When she opened the fridge, our cat, Glen Close, jumped out!

He must have jumped in without me knowing a little earlier in the evening when I had been getting something out of the fridge.

Although it was funny, it made me nervous. What if Marissa hadn't chosen to get a late night snack? I'd like to think his howls would have been heard through the fridge door and up the stairs before he would have suffered, but I don't really know how sound proof the fridge is.

(remember in the 80's when nearly every show geared towards kids seemed to have at least one episode about the dangers of playing, and getting locked inside, an abandoned refrigerators? Then the government passed a law requiring refrigerators to be able to be opened from the inside by children? As great as it may be to have fewer fridge trapped children, aren't we as a society missing out on a valuable plot line for our current childrens media?)


Speaking of Glen, I've never felt so attached to a cat before. I've had cats that I loved and who shared my bed at night, but none that I've loved as much as Glen. I've never been able to relate to people who seemed to have an intense affection for their cats, talking about them to other people, buying them expensive food and toys. But now look at me! (or don't look at me...I'm a MONSTER!) I am one of those people!

I've been trying to think of why and this is what I've come up with:

1) This is the first cat, since I was a young teenager, I've acquired while it was a kitten. (I had two kittens in the little cabin I had when I first moved to Olympia, but one got lost in the woods{I think racoons('coons) ate it} and the other I had to part with after my landlord discovered I had kittens).
There is definitely a greater bond that is able to happen with another living being when you raise it from infancy. The handful of cats I've had since graduating high school were all adults by the time I acquired them.

2) Marissa and I got this cat together. In one sense, this makes it like our baby. It becomes more than just a two way affection between the cat and myself but a three way connection between Marissa, Glenn Close and myself. Having to share the responsibility and affection for a cat with my significant other, rather than lessen the affection I feel towards the cat, enhances it.

3) He is a unique cat. From the day we picked Glen up from the family we adopted him from, we noticed he was more endearing than other cats either of us had owned. His nature is very gentle and affectionate. He likes to be held and often curls up against one of us while we are sleeping or reading. He brings us toys for him to throw for him which he will bring back over and over until my arm gets tired. We both noticed immediately that he is brighter than most cats. He seemed to have an awareness about him that other cats lack. He learns quickly.
In some ways, he is almost dog like. He follows us around the house, waits beside the front door for us to get home and gets super excited when we do. He quickly learned his name.
I like watching him try and figure things out. I once put a toy mouse inside a ceramic bear head I had made, and it took him almost 15 minutes to decipher getting the mouse out, but he stuck to it, trying all sorts of different things until he got it. (now he can get the mouse out in .5 seconds) We don't let him outside very often and when he does go out, he rarely goes more than 5 feet in any direction, instead he explores every square inch of the area immediately outside our door.
He even learned quickly when not to use his claws.(though he will still sometimes run up my legs and back to get on my shoulders as I gasp and yell in pain.) When he was a kitten we bought him these little plastic covers for his nails, but once they fell off we realized he had seemed to learn when it was and wasn't okay to use his claws, so we haven't had to put the covers on since. 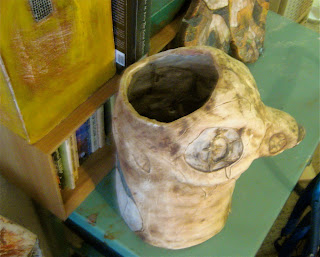